I have been covering Iskandar Malaysia since 2008. Like most Singaporeans, I was at first skeptical about this special economic zone as Malaysia has a history of not following through on its ambitious projects.

In 2008, I made a giant leap of faith to explore Iskandar Malaysia as part of a special feature that I was writing when I was a property editor.

All those cautionary tales that my mom and relatives had told me peppered with “I told you so” to “be careful” remained ingrained in my head while I was reporting on the ground.

It was a nerve-racking experience to say the least, as I was expecting to be robbed while on the streets.

It was like taming the giant, so to speak.

Nonetheless, the various officials from IRDA to Iskandar Investment Berhad (IIB) made me feel completely at ease and were completely receptive to all my questions ranging from crime to politics.

Nothing was off the record as we spoke about Malaysia’s track record (specifically its lack of follow through when launching massive projects) to the previously strained relationship between Singapore and Malaysia and how this will impact Iskandar Malaysia.

They seemed genuinely warm and open – they same Malaysian-style warm hospitality that I had experienced back in my kampung.

Once we got out of the office to tour Nusajaya, I was completely blown away by the sheer scale of the developments taking place.

Flagship B: Iskandar Puteri (formerly known as Nusajaya) and Medini 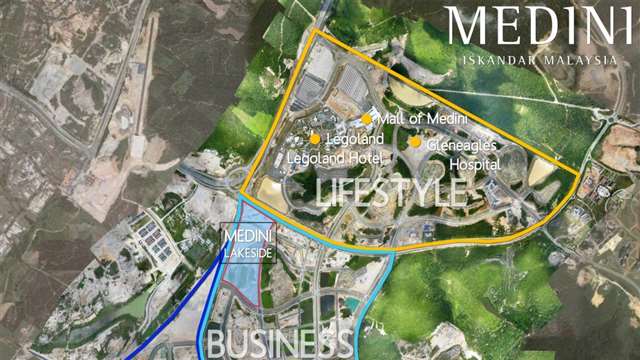 This is where Iskandar Malaysia was launched in 2006 and where its success story was created. A former greenfield site, Nusajaya had been planned from scratch, resulting in an orderly and well-planned city. All the necessary infrastructure had been laid out in painstaking detail to ensure the entire city works. For example, there are residential precincts linked by highways and park connectors to complement the various economic drivers from EduCity to LEGOLAND Theme Park.

Within Nusajaya lies Medini, planned as a world-class township with park connectors, commercial and residential precincts as well as various catalytic industries. Medini is the only place in Malaysia where foreigners can own homes below RM1 million and where they are not subjected to real property gains tax (RPGT). This Grade “A” site is home to two joint-venture projects between

Temasek Holdings and Khazanah Nasional, the result from the land swap deal that was concluded in Singapore in 2010. Covering only 9.3 sq km, RM5.9 billion has been spent to develop the infrastructure here. This greenfield site is also home to the ecologically rich Pendas River which hosts a diverse variety of flora and fauna.

There are four economic drivers here: education, healthcare, the creative industry and tourism with 38,715, 30,450 15,237 and 19,786 jobs created respectively. Nusajaya will welcome a new CBD in Gerbang Nusajaya that will serve as the gateway to Malaysia. The Nusajaya High Speed Rail station will also be located here before entering Singapore. There are plans to have a transport hub next to the Coastal Highway (near the LEGOLAND Theme Park) that serves as the interchange station between the RTS-BRT line within Medini. However, this has yet to materialise. The Johor-Nusajaya BRT line will pass through LEGOLAND before ending in Anjung next to East Ledang.

Area analysis for Nusajaya and Medini

This is phase one of Iskandar Malaysia’s development. Puteri Harbour, Nusajaya and Medini have seen significant price movements since the rapid pace of development that took place here since 2006. For example, in 2010, the price per square foot for Puteri Harbour, Nusjaya and Medini were RM600, RM350 and RM350 respectively. However, it has since jumped to RM1,200, RM900 and RM700 per square foot respectively.

As a guide, a Horizon Hills landed terrace home was launched at around RM288,000 in 2008 but has seen transactions at around RM800,000 to RM1.2 million. As such, Johoreans who had bought homes here since 2008 have seen the property price appreciate in value. Nusajaya and Medini feature well-planned townships that have helped attract a significant number of foreign buyers.

Now, let us assume you would like to buy a studio unit in this area. The unit is priced at RM900 per square foot with a size of 500 square feet.

If we work backwards using the income-to-mortgage ratio: to afford this unit, your gross income must be:

For a fresh graduate earning, say, RM3,000 a month, this property is unaffordable.

So what does the research show?

For Johoreans: Many Johoreans tend to shy away from this area except those who had bought their property before Nusajaya became “hot”. This area is considered out-of-reach for first-time homeowners.

For foreigners: Projects here are very popular as Nusajaya and Medini are well- planned. In addition, there is no minimum purchase price, no bumiputera quota and no RPGT in Medini.